This past weekend’s provincial basketball tournaments, Hoopla, were more than successful for those teams from the Horizon District Athletic Association participating. Three host teams drove the hoop for the gold in their divisions. The Lake Lenore/Annaheim boys acquitted themselves respectably in their division. The 2A St. Brieux boys basketball squad, the 2A girls from Wynyard, and the 1A girls all saw their hard work pay off with provincial championships.

All three locations, St. Brieux, Lake Lenore, and Wynyard had just come off hosting their regional championships the week before. In order to host a rural Hoopla in a more contained environment, all three stepped forward once again to welcome competitors.

In their opening semi-final, the Lake Lenore/Middle Lake Lancers came up against Stoughton, and Coach Curtis Strueby says the girls jumped out to an early lead and never looked back to take a 62-34 win. Next up was Gladmar who always has a competitive program.

“Again, we jumped out to a big lead early - the girls were ready to go,” says Strueby. “It was apparent they were both mentally and physically ready to go, and they executed the game plan to perfection.”

The season was almost split in two, says Strueby, where the team didn’t play competitively in January due to COVID considerations. When they came back, the strategies quickly gelled and the team performed well down the stretch.

“In the last two weeks, we’ve played some really good basketball, and we saved our best game for last,” Strueby acknowledges.

Further up Highway 368, the number one seeded St. Brieux Crusaders got set for their provincial run. After dispatching Preeceville 82-52, St. Brieux faced long time provincial rivals Norquay who play an equally aggressive brand of ball. The Crusaders have faced Norquay in previous provincial finals, defeating them by only a couple of points. This time, Norquay jumped out to a 9 point lead, and St. Brieux was fighting their way back into the game when disaster struck.

Dawson Kessir, who’s a top 10 player in the province, jumped for a shot and landed twisted and dislocating his ankle. The injury was serious enough to warrant an ambulance and an extended delay in the game toward the end of the first half.

“We returned to play the last two minutes of the first half,” explains coach Ryan Trumbley, “And our guys came out on fire.”

The Crusaders went on a tear and chalked up a three point lead by the half.

“Our guys rallied together and found it somewhere,” says coach Erin Berhard, “It was like we have to win it for Dawson.”

With Kessir out of the game, Jagger Teiber, who himself had just returned from an ankle injury, filled the big forward’s shoes and racked up 17 points, hitting 3 pointers at will. Point guard Aloysius Llorca plagued Norquay’s offensive star to the delight of the 600 spectators in attendance. The two teams dug in and swapped leads throughout the final seconds, until St. Brieux pulled ahead with a 5 point lead at the buzzer.

Further to the south, Wynyard girls contended with a team from Norquay in the semis, moving into the final with a 75-42 win. In the end, the Wynyard team captured gold over the McLurg HS squad from Wilkie.

Basketball strength resides in the heartland with great weekend performances by all at the 2022 edition of Hoopla. 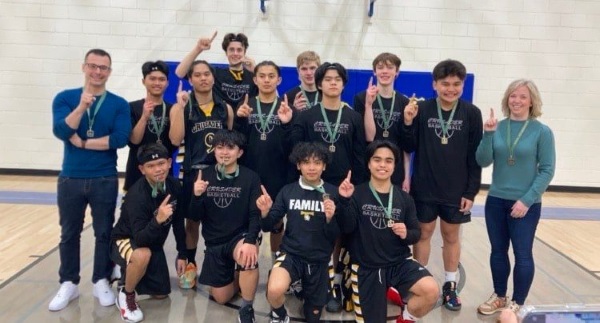 15 UAAA Dodgers split in the south

Humboldt/Lanigan RCMP on the lookout for shoplifter