The City of Humboldt knows the importance of community wellness. Learn more...

Extracting potash from the ground is one thing; getting it to market is another.

Once the BHP Jansen Stage 1 project enters production mode, product for shipping will need to be moved by rail to the dedicated port on BC’s west coast. In order to access the CN rail lines that will take the potash there, BHP and CN are constructing spur lines that will connect to both the CP and CN mainlines in the area.  The CN Spur development was the subject of an information meeting held in Jansen at the Community Hall on April 26. The second of two meetings was slated for Nokomis on April 27.

The gathered crowd heard from representatives of both BHP and CN about the Jansen Stage 1 progress and plans for the upcoming rail build. The opening of the meeting saw representatives of BHP recapping the project’s development. The mining giant forecasts construction completion of the mine in 2027 with a ramp up to full production happening over the next two years.

CN Manager of Public Relations Scott Brown took the podium to outline the current phase of the rail project design. CN has responsibility for the design and construction of 47 kilometres of track extending from approximately Highway 16 and the parallel CP line to the junction with the CN Watrous Mainline. Up to the mine site, BHP will create a joint use line that can take product from the mine site to either the CP mainline or the CN mainline.

The plan is for a level crossing at Highway 16 just west of the village of Jansen. From there, the line follows, as much as possible, existing roadways and land plots in a winding path to the CN line just east of the town of Nokomis. Brown explains some of the key considerations in determining the route.

“We wanted to avoid crossing railways, crossing highways, crossing municipal roads. We also took steps to make sure our Wye track where we hook onto Nokomis was far enough away from town that it would avoid interfering with local residents as much as possible.”

One of the prime considerations, noted Brown, is always safety, not only for track maintenance and equipment safety, but particularly at crossings. Approach angles, sightlines, signage, electronic controls and gates are all part of those measures, depending on the traffic.

“We have a whole host of restrictions that are in place for regulations of rail operations that cover crossing safety, so a lot of that was incorporated into the building of the spur.”

In fact, four roads are level crossings, where the road will briefly curve as it crosses the track to create a 90 degree crossing with clear sightlines.

Brown noted that all along the intended route, noise and vibration testing against those residences in proximity of the spur line was conducted. In the briefing, Brown noted that the noise generated during construction and subsequent operation would all be within acceptable parameters.

Concerns were expressed by some audience members around challenges in navigating the crossing sites with increasingly large agricultural equipment. Similarly, there was concern around the transmission of clubroot, an invasive disease affecting canola, coming in with construction equipment. In each of the cases, both representatives of CN and BHP said they would take concerns into consideration. When it came to club root, cleaning and mitigation processes are already undertaken at Jansen.

The plan now heads to the Canadian Transportation Agency (CTA) for approval. The process needs to include engagement with communities, First nations, and neighbourhoods along with the submission of technical specs to the regulator. Deliberations have no specific timeframe, but the hope is that approval will come in time for a spring 2023 start on earth moving. Track construction would start the following year with the aim of having the line operational for moving product by the projected mine startup of 2027. 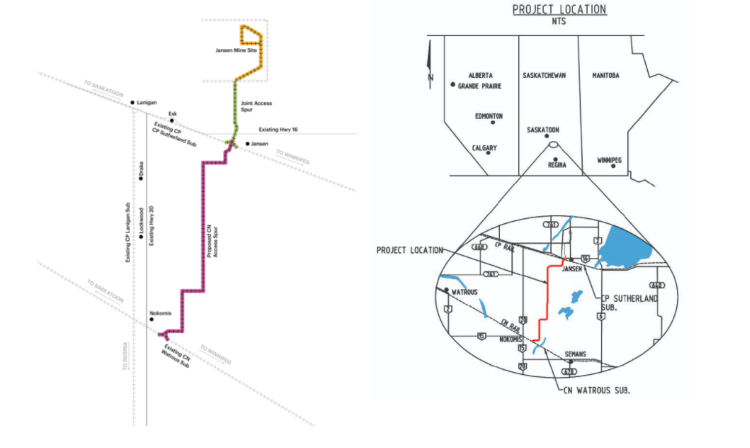 RCMP on the search for window crashers

WATCH - A ride for everyone at the Vintage Club Auto Show

Spring Into Summer Craft Sale a hit in Lake Lenore

Tammy Ward steps in as president of Humboldt Chamber