Voters will have say in proposed new electoral boundaries

Written by Maury Wrubleski Thursday, May 19 2022, 7:59 AM
Article continues below advertisement ↴

With files from Shawn Slaght

Saskatchewan electors will soon have their say in the proposed reworking of federal election boundaries. The Federal Electoral Boundaries Commission for Saskatchewan has been working toward a final report that would redistribute voters into several new districts and amend the boundaries for existing ones. The Commission operates as an independent and non-partisan agency that works, through public consultation, to oversee the equitable distribution of voters in the districts.

"The Saskatchewan Commission is pleased to present its proposal for public comment. We look forward to hearing everyone's views during the public consultation of our work," said the Honourable Justice Georgina Jackson, Chair of the three-member commission. Dr. Bonita Beatty and Professor Mark Carter are the other members of the Commission who are responsible for the readjustment of the province's federal electoral boundaries.

A release by the Commission states that the review is in response to Saskatchewan's increase in population from 1,033,381 in 2011 to 1,132,505, as captured in the 2021 Census, and takes into consideration communities of interest or identity, and historic and geographic factors.

Possibly the most affected are rural boundaries, in part due to population shifts.

“I know there's a problem here because of the depopulation in rural areas,” said Dr. Howard Leeson, Professor Emeritus of Political Science at the University of Regina. “For instance, you have people in Lumsden voting with people in Kindersley. There's no common interest left anymore in there because the people of Lumsden are really a bedroom community of Regina, and Kindersley is quite close to the Alberta border in a very rural area.”

The proposed map puts Humboldt and area in the familiar position of being on the cusp of several ridings. The city of Humboldt, now located in the Saskatoon “wrap-around” riding of Carlton Trail - Eagle Creek, would be in the southeast corner of the proposed Saskatoon-Wanuskewin district. Only a few miles to the south, residents would vote in the Kindersley-Rosetown riding which extends from Wynyard on the eastern frontier to the Alberta border. Those a little further east would remain in the Yorkton-Melville riding.

The electoral boundaries are examined by the Federal Electoral Boundaries Commission for Saskatchewan every 10 years after the census.  The Saskatchewan commission is holding 15 public hearings, in person and virtual, to gather comments and feedback on the proposed boundaries and electoral district names.

More information on the hearings, the process and ways to communicate are available on the Commission's website. 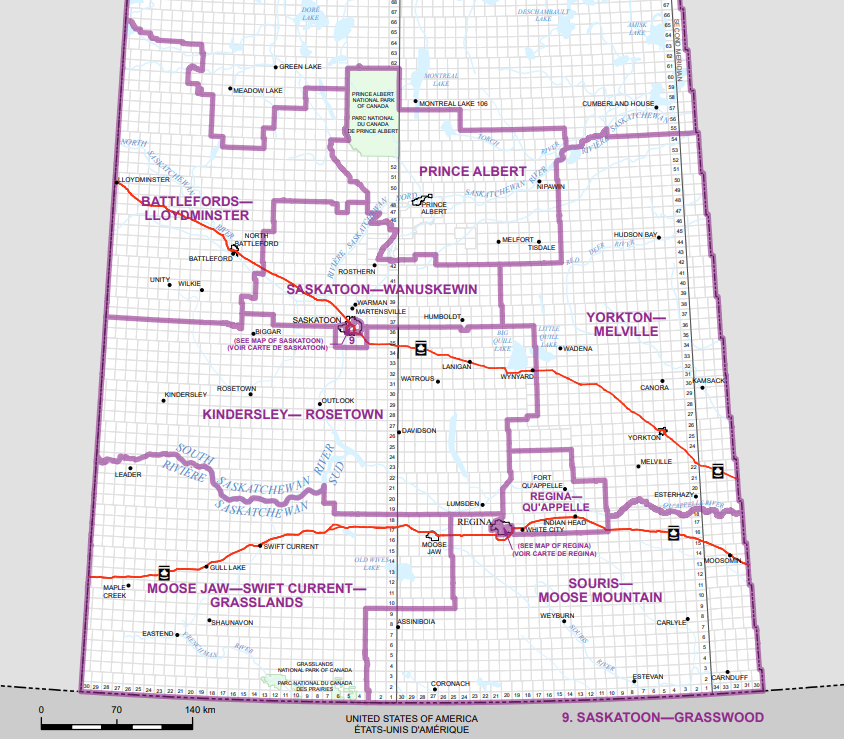 Sizzler back with a different spin

Arrest made in murder investigation

Uneven economic recovery does not bring all Canadian women with it: experts

Watch out for aquatic invasive species this summer: Ministry of Environment says